If you learn one thing about me in all of my GMing life, let it be this: I have a propensity for details and sweeping, elaborate combat, and hate all of the work involved when it gets to the large scale, including as a player. These rules below are rules that I have come up with for the Cypher System to meet all of my needs regarding these things.

At its heart, any time we sit down to play an RPG, what we are playing is a series of rules, prohibitions, and if-then statements represented by our words, or by a vector portrayed in front of us for audio and/or visual aid. The Complication System takes these rules and makes them actionable hurdles.

In a mass combat, or a mess of people, there are many muddled complications which can arise just from existing in one area. In this way, we attach complications to the PCs and groups themselves. Instead of only giving an effect or condition to track for the purposes of roll…
Post a Comment
Read more

By PhantomRollbooth - April 30, 2019
ABIDE BY THE RULES, [INSERT INSULT HERE]A card game playable with a 52-card deck for 2-5 people.
The object is to discard all of your cards. The first to discard all of their cards wins.


Each player chooses a rule in secret.Determine who goes first by drawing a card open faced from the deck. Whoever draws the highest card goes first, 2 being lowest and Ace being highest. In the event of a tie, the tied players draw to determine order. Reshuffle these cards into the deck.Each player draws 5 cards.Each player then takes their turn, playing a single card into the discard pile, starting with the player who won the draw, and then following in a clockwise fashion.If another player breaks your rule, you deal them 2 cards. Do not state the rule they broke. Simply state "ABIDE BY THE RULES, ____. You may use their name, or a Victorian-styled insult. We recommend YouCur, or something sillier and anachronistic like Straight to Video Nic Cage movie. Play then passes to the next player. You pla…
Post a Comment
Read more

By PhantomRollbooth - April 09, 2019
That was a rather click-baity title wasn't it?

I have to say, I'm a little curious at the latest conversation. It's big, amorphous, tough, opinionated, and, like most of these topics, will vary from table to table.

There are a lot of good insights into this topic floating around as is, but I'm never impressed with myself in trying to get out a solid thought on the twitterverse--maybe I'm born with it, maybe it's TBI. Regardless of the reason, I'm compiling my thoughts here on

Wow, again, click-baity title. But isn't it essentially true? The conversation of fudging dice rolls is essentially cheating in a game governed by chance. In the most extreme examples, it could fall into the same camp as counting cards at the casino, or throwing someone out of your card game because you don't like the way the hands are going. In the least extreme examples, it could be sincere trouble with math, or a gentle hand to nudge fate in f…
1 comment
Read more

In which my player indicated to me that he wanted to take everyone to the theater so I narrated an original Opera in 4 parts.

The journey to Sharn is over, but the night only begins as our party prepares for The Midnight Opera at the Syrazune Theater in Upper Menthis. Invited by Vedim, our resident smiling and puckish elf lush, the party prepares themselves in their best. Abel wears his cast-off armor and medals, Orival wears glamourweave and a half cape which obscures the dragonmark on his shoulder, and Agata does the best she can with the colorful silks she managed to save from her old life. They fit in, somewhat. Vedim is waiting in a box that he paid for personally.

The party is rudely pressed aside to make way for Lord Mayor Cathan ir'Demell, a sweaty, rotund, bald-headed human man with his wife on his arm. They make their way to their private box flanked by a personal escort of eight private mercenaries.


Our party collects themselves.


Rasdaar escorts the half orc and goblin prisoner to the holding cell cart.


Meanwhile, Orival takes Vedim’s rapier and jams it into the coupling gauges of the cart as the momentum sends the rocking carriage back into place again. Vedim attempts the same idea with his sheath and misses. The rapier breaks, sending the end skittering beneath the train as Norsys arrives holding forward a connector from her hip parts.


At this moment, a siege of arrows drops on the party from above, followed closely by a jar of alchemist’s fire. The three dodge out of the way as the slick material coated and flames up between the railway cars.


Agata accosts her countrymen, asking what he is doing here. What they want. The Cyran responded he only wanted the money--just like the others. Agata considers the truth in this, but when asked what he was doing with them, he responds, it doesn’t matter. What matters is what happens next.

Tales from the Rollbooth: Eberron 5e Campaign, Session 1: Strangers on a Train

By PhantomRollbooth - February 28, 2019
We began our story in Passage, boarding a train headed for Sharn.


Vedim Nailo, an elven noble, thespian and entertainer, arrived first to the station and produced a first class ticket.


Norsys, a warforged barbarian, also traveled 1st class, having intimidated someone into giving her their ticket. She quickly drew the attention of Vedim, as well as everyone else on board.


Agata, a Cyrei human refugee, boarded with rough trappings and baggage, her ticket afforded to her from a Cyrei relief program.


Orival, a Koravar artificer from Aundair, was the last to board--the very last, nearly missing the train. He boarded with a standard class ticket and luggage.


Ori found himself boarded in the same room as Agata. He was forward and engaging. She was clearly cut deep from past wounds, but perhaps relieved that someone, for once, doesn’t wish to poke those old wounds to see how deep they go concerning Cyre. Rather than having old wounds dug out, she was instead treated to an hour long explanati…
Post a Comment
Read more 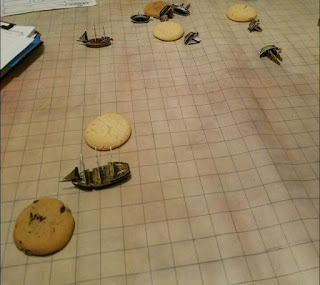 Hi, there, Marsie here, ready with another piping hot article right out of the bad idea oven.

There are a great many types of preparation for your games, and we could talk about the concept of what is good prep vs bad prep for days.

And the true answer is:

It depends on your group. Players have varying needs to accommodate, and so do their characters. So does your game. So does your style. So do the individual themes you want to hit. It's all different. We all do different things to run the best game we can at the time. We mess up, we learn. We take the good things with us, and (hopefully) chuck the bad ideas out the window.

The most preparation I've ever done for games revolved around centerpieces for large scale fights. Whether that be preparing ice cube miniatures for an adventure regarding the Lich Queen of Snow, or preparing a Jenga pyre to contain a volatile artifact that needed to be extracted before the whole thing burned to the ground, or Kingsmanning my party in a du…
Post a Comment
Read more
More posts